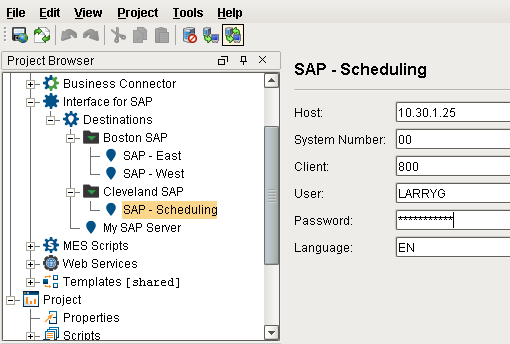 The ISA-95 standard defines five levels (0 through 4) to categorize activities in the production process. The standard includes the Functional Hierarchy Model, shown in the figure below. As the model illustrates, ERP systems typically encompass activities defined at Level 4, which are distinct from—and complementary to—those defined for an MES system.

To give some more concrete examples, an ERP system will typically perform the following:

SAP installations tend to consist of complex, multi-server architectures that require dedicated teams to manage and support. Uptime of an SAP system is of critical importance, as ERP systems are instrumental to the execution of business processes across the entire enterprise, from orders and scheduling to sales and HR.

The purpose of this section is not to be a comprehensive overview of SAP but rather to provide selected background knowledge relevant to deploying the Sepasoft Interface for SAP ERP Module.

By a wide margin, the most popular ERP vendor, by install base, is SAP SE.

Colloquially speaking, "SAP" may refer to one of the following:

For purposes of this documentation, we will use "SAP SE" when referring to the company, and just "SAP" when referencing one of its ERP products

SAP SE's ERP offerings and technology have grown and evolved—both through development, as well as through acquisition—over the past 40+ years.

The latest enhancement pack, 8, was released in 2016 but requires a migration over to a new database backend called HANA, as described below.

More recently, SAP SE has been focusing on the development of its newer HANA technology.

Like the term "SAP" itself, "SAP HANA" may refer to one of the following:

Examples of Technical Modules include ABAP, the programming language of SAP, and NetWeaver, the technology platform on which modern SAP installations is built.

There are many different ways of interfacing with an SAP system. Some require additional middleware and others require extensive configuration or setup. For platforms like Ignition that are built on Java, SAP provides a library called the Java Connector ("JCo") to enable bidirectional communication to an SAP system.

Not to be confused with Functional Modules, Function Modules are encapsulated ABAP code. They have documented interfaces for inputs and outputs, similar to a function signature. Typical SAP installations come bundled with hundreds of Function Modules, and developers can also create their own.

Function Modules can be configured to be "Remote-Enabled," which means they can be accessed from external applications via the Remote Functional Call (RFC) protocol.

Note to programmers: Function Modules can be thought of as SAP's version of a function. Similarly, Function Groups are akin to Python modules or Java packages. Designating a Function Module as "Remote-Enabled" is like declaring a Java function as Public.

Unlike Function Modules, BAPIs are always "remote-enabled," as they are intended to be called from external systems by design. Developers can also create their own BAPIs (typically called "ZBAPIs").

Synchronous RFCs (sRFCs) immediately return a response. These are ideal for requesting data (e.g., get production orders), as the data will be the most up-to-date and there is no risk of calling the RFC multiple times.

If an sRFC fails, the calling program will know right away, after which it can parse out the error message and either retry the call or pass it into a queue for manual reconciliation.

Transaction RFCs (tRFCS) are processed asynchronously and include a unique Transaction ID. If an RFC is called with the same Transaction ID multiple times, SAP will ignore subsequent calls while still returning an “OK” status. tRFCs should be used for submitting data (e.g., posting a production order confirmation) where it is important that a call is not duplicated.

Similar to tRFCs, queued RFCs (qRFCs) are processed asynchronously and require a Transaction ID. They are built on top of tRFCs and have the added protection of ensuring that messages are processed in the correct order. This is important for executing sequences where order matters (e.g., posting a Goods Receipt prior to marking a Production Order as Technically Complete (TECO)).