How you model a production line in the Production Model will be dependent upon the following factors:

The importance of modelling the line correctly based on the above factors will drive the usability and usefulness of any production data or metrics generated. If a production line of many cells is modeled simply as a single cell, then features provided by the OEE module such as downtime detection methods, cell cycle time, aggregation of machine states by cell, and visual aspects of the OEE components such as the OEE Time chart will all be diminished. Forcing management to schedule production runs on multiple lines that they did not do prior to the OEE implementation, as well as only allowing a single scheduled run on a a set of cells where traditionally multiple schedules existed are signs that the model may not be correct.

In modelling the Line, you will create a Production Model in the Designer that:

What Is The Production Model?

When any of the core MES modules (OEE, SPC, Recipe, T&T) are installed, the Production Model is added to the Global project resources in the Project Browser window of the Ignition Designer. The Production Model allows you to define your manufacturing process in a tree view form and provides an organized way to configure, control, and analyze your manufacturing activities. It provides the foundation on which the MES modules are built.

The Production Model is a hierarchy of Sites, Areas, Lines, Cell Groups, Cells, Locations, Storage Zones and Storage Units. Typically, Lines and Cells are used to represent machinery or equipment where a process occurs transforming raw materials into sub-assemblies or finished goods. Storage Zones and Storage Units are typically used to define where to get or store material. 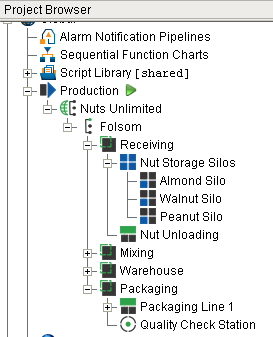 Below are the different types of Production Items that can be added to the production model.

The production model is configured within the Ignition designer and is accessed by selecting the Production node under Global in the project browser. From here your enterprise, site, area(s), line(s) and line cell(s), line cell group(s), storage zone(s) and storage unit(s) can be added, renamed and deleted.

It is extremely important to understand production OPC values have an OPC item path that matches the layout of the production model and that renaming production items can cause Ignition tags associated with a production item to stop being updated.

When you add a cell to a line that had already run in the past, you will either get a popup and/or an error in the Ignition designer console that says: "Cannot start OEE run on the equipment (Enterprise\Site\Area\Line 2) because production settings for cell group or cell (New Pal) do not exist."

To configure production settings for the new cell:

To rename a production item, right-click on it and select Rename (or press F2), then enter the new name.

DO NOT rename a production Line item in run-time while an OEE Operation is in progress. An error will occur that that will require assistance from Sepasoft Support.

To remove an existing production item, right-click on the item and select the Delete menu item. A window will appear confirming that you permanently want to delete the production item.

Please note that any line(s), cell(s), cell group(s) and location(s) underneath the production item will also be permanently removed.

Adding a new Cell Group to the Production Model

Right Click mouse button and select Paste to make a copy of that production item in the production model.

If you are copying a line, select the line before copying it. When you paste it, select the area in which to the create a copy of that line. 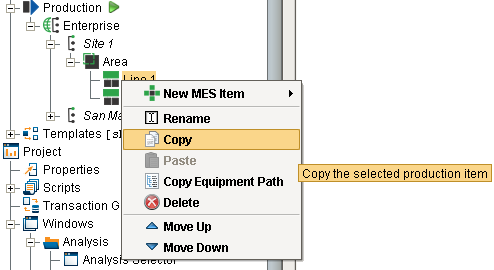 Please refer to the OPC Production Server Tag Reference in the Appendix for more help.